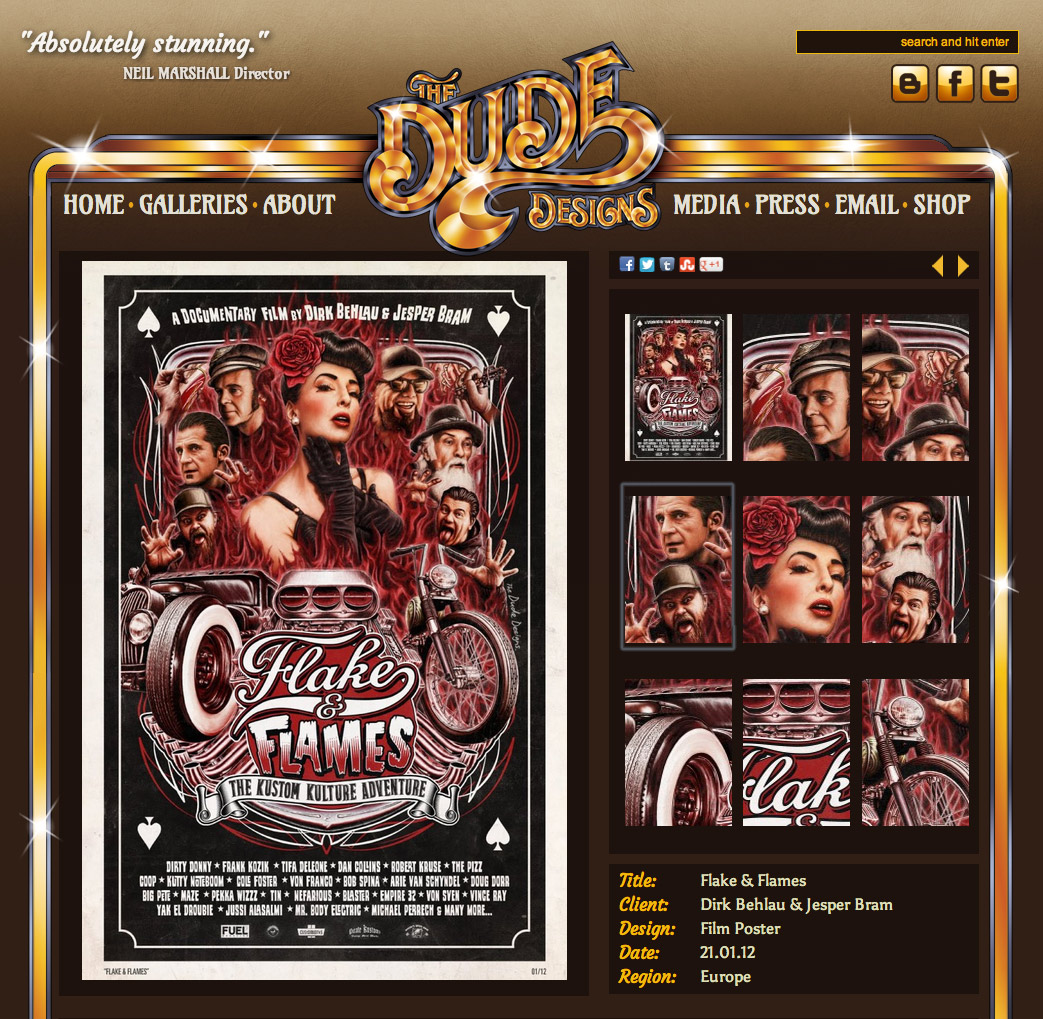 Here are some infos about the official movie poster by Tome Hodge aka The Dude Designs. Let’s see what the master himself has to say:

“Flake & Flames is a feature documentary about kustom kulture an American neologism used to describe the artworks, vehicles, hairstyles, and fashions of those who drove and built custom cars and motorcycles in the United States of America from the 1950s through today.

Dirk and Jesper contacted me as they wanted to have that classic movie poster feel to the design. I had to brush up on the design style of kustom kulture as i’d not really had any experience of it before.

It couldn’t just be a promotional poster/DVD cover, as this had to be a piece of film art in its own right that the enthusiasts would want to hang in there studios, bars and garages. The scene has such a specific look and largely much made up of creative’s that there was a bit of pressure to represent all the right nuances.

Straight away i liked the idea of having all the elements coming out of an old ford grill and then having the title design sitting in an engine surround with a car and bike bursting forth so that became the basic frame work of the design. As this was a documentary with many people interviewed, i needed to select a central character or main point of focus so Tifa Deleone as a classical pinup model i felt would be the best choice to represent the aesthetic and kustom kulture style. I then brought in some select characters to show and attract the enthusiasts, finally having Dirk and Jesper the film makers themselves at the bottom as they are quite characters in there own right and an integral part of the journey the documentary takes.

As this culture covers so many creative platforms i needed to show the art of tattooing and pin striping to add some form of a visual explanation along with to the cars so the viewer can get an instant idea of what its all about. The graphic style of pin stripping was also encompassed in the design to nicely round off the visual and I then sat all this in ace of spades playing card esque frame work, each part of this design had to be selected to reference a different parts within the kustom kulture scene which seeing all the photos of the poster hung up now in the cafes, bars, garages and studio’s i think i managed to achieve.”

Indeed. The poster itself became a big hit by lowbrow and kustom kulture fans around the globe even before the film was actually released. We received so many photos of the framed poster hanging in bars, shops, garages, living rooms – from everywhere in the world. We are still very happy that Tom did the poster for us – it’s just perfect. Little story behind it: Dirk Behlau was on his way to Kopenhagen/Denmark to meet up with Jesper Bram in october 2011, reading a interview in the german Virus magazine about Tom. Dirk recognized Tom’s work earlier; the “Hobo with a Shotgun” movie with Rudger Hauer has a great poster design as well. When the plane landed Dirk & Jesper agreed immediately that they want Tom to do the artwork for Flake & Flames. We contacted him, he was interested and two months later we had the poster in our hands. The rest is history.

The poster can be ordered at www.buyflakeandflames.eu